When you choose KINETIQ, you are choosing a boutique team with big-company expertise.  You give up nothing compared to the bigger companies out there, but the advantages are countless.  We offer you continuity throughout the entire design, engineering, installation and service phases of your project.  Each of our team members are experts at their craft and completely trustworthy.  Inexperience is not in our vocabulary.

We are locally owned and entrenched in our community.

Our sole reason for existence is our commitment to doing the right thing for our clients.

There may be only a few of us, but our specialty is in the largest, most challenging projects.

For nearly 2 decades, we have served the Southeast.

”My name is Steve Schnugg and I founded Synergy Multimedia in 2001 while finishing my B.S. in Business Management degree at Georgia Tech. For as long as I can remember, I have loved technology. That love evolved into a passion for designing solutions that harness technology to enhance peoples' lives. Nearly two decades on, I still love what I do, whether it's saving you 5 minutes during your day, helping you feel safe in your own home, setting the mood with lighting for an intimate dinner, or taking you to another world through the latest cinematic masterpiece.

I believe that personally serving my clients is the best way to design, install and support automated AV systems. I work hard to make sure there's nobody that has more knowledge about any system that we provide. Consequently, I'm confident that we are consistently offering the absolute best advice and we strive to always do so for the right reasons.

In 2019, we reinvented Synergy Multimedia to our new brand of KINETIQ as we look forward to the next two decades of service.

I invite you to contact us today for a confidential, personal consultation on your next project.

Our team is genuinely passionate about tech. 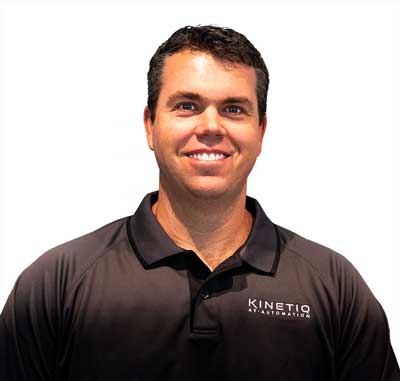 Steve was born and raised in Southern California but moved to Atlanta in 1997 to attend Georgia Tech, graduating with a degree in business management in 2001. Steve has a beautiful and supportive wife, Kathleen, and three daughters, Natalie, Emily, and Sabrina.

Steve is an avid tennis player and holds over 30 AA-1 Men’s and Mixed Doubles ALTA championship plates, mostly thanks to the tremendous talents of his teammates. Steve and his family attend the Catholic Church of St. Anne in Marietta and their faith is an important part of their lives. At KINETIQ, Steve has created a culture that is welcoming towards clients from all walks of life and he is extremely proud of our diverse client base.

Jud has more than 16 years of experience in the home automation and AV industry and has been with Synergy since 2013. He was born and raised in Virginia and relocated to Atlanta in 2013.

Jud started his AV career as a Technician and Operations Expert, installing custom audio/video systems for customers throughout the Washington DC area. His work since has focused on residential customer-focused technology solutions of all types, including custom AV systems, home theaters, full house systems, lighting control systems, custom shading, and burglar and fire alarms.; and he has experience with all of the major systems used in automation, both programming and troubleshooting.

As a Reservist with the United States Marine Corps from 1999-2012, Jud’s AV career was occasionally interrupted as he was called to Active Duty in support of Operation Iraqi Freedom and Operation Enduring Freedom. Following his last tour of Active Duty in 2009-2010, he expanded his AV work to include not only installation, but also management, system design, and programming.

When he is not at work, Jud can often be found working on his own home automation system or doing various DIY projects. He lives with his wife Ilana, son Wyatt, and dog Smitty.

Connect with us today to discuss your next project.

We look forward to hearing from you.

Connect with Us Now